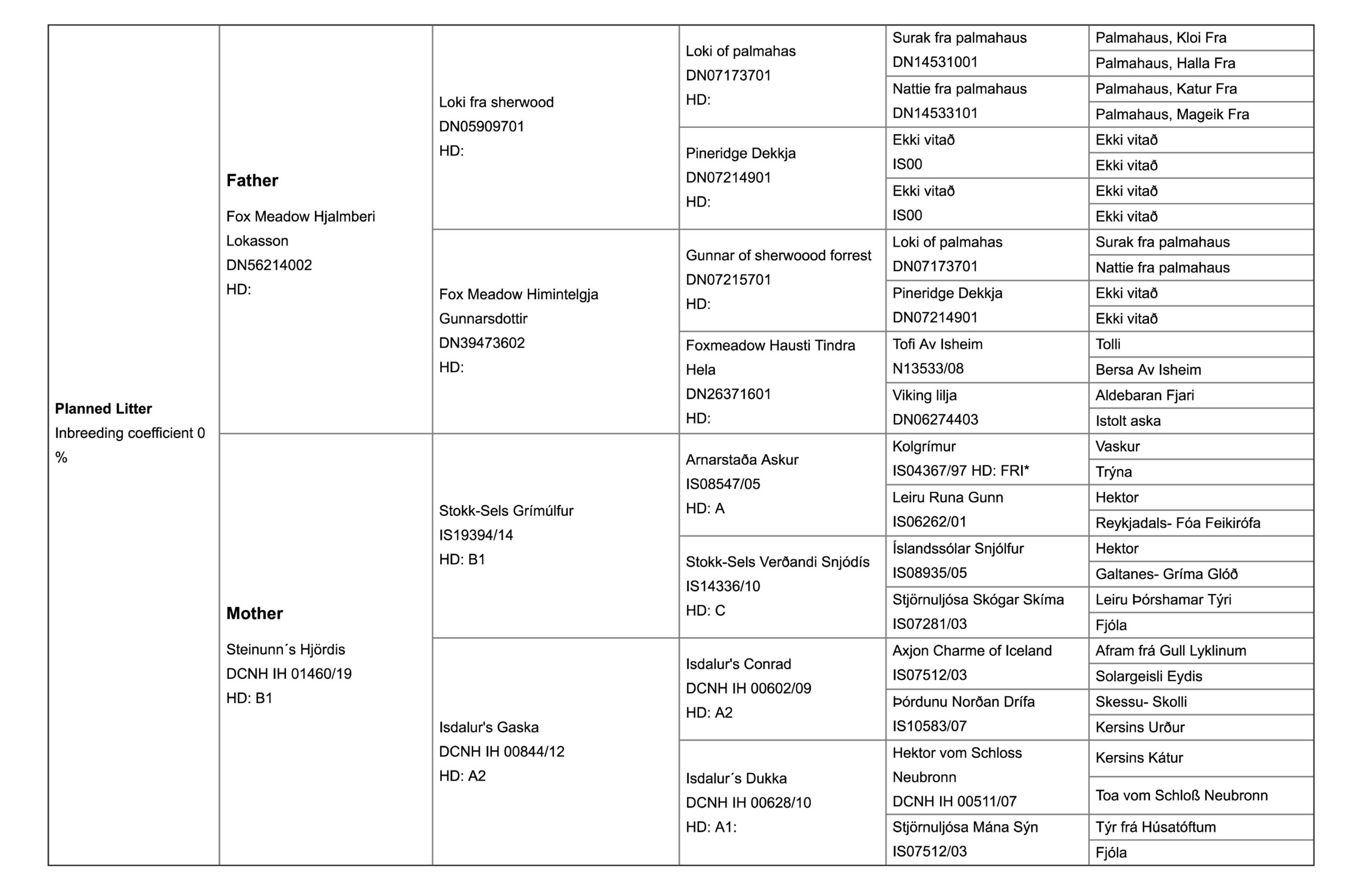 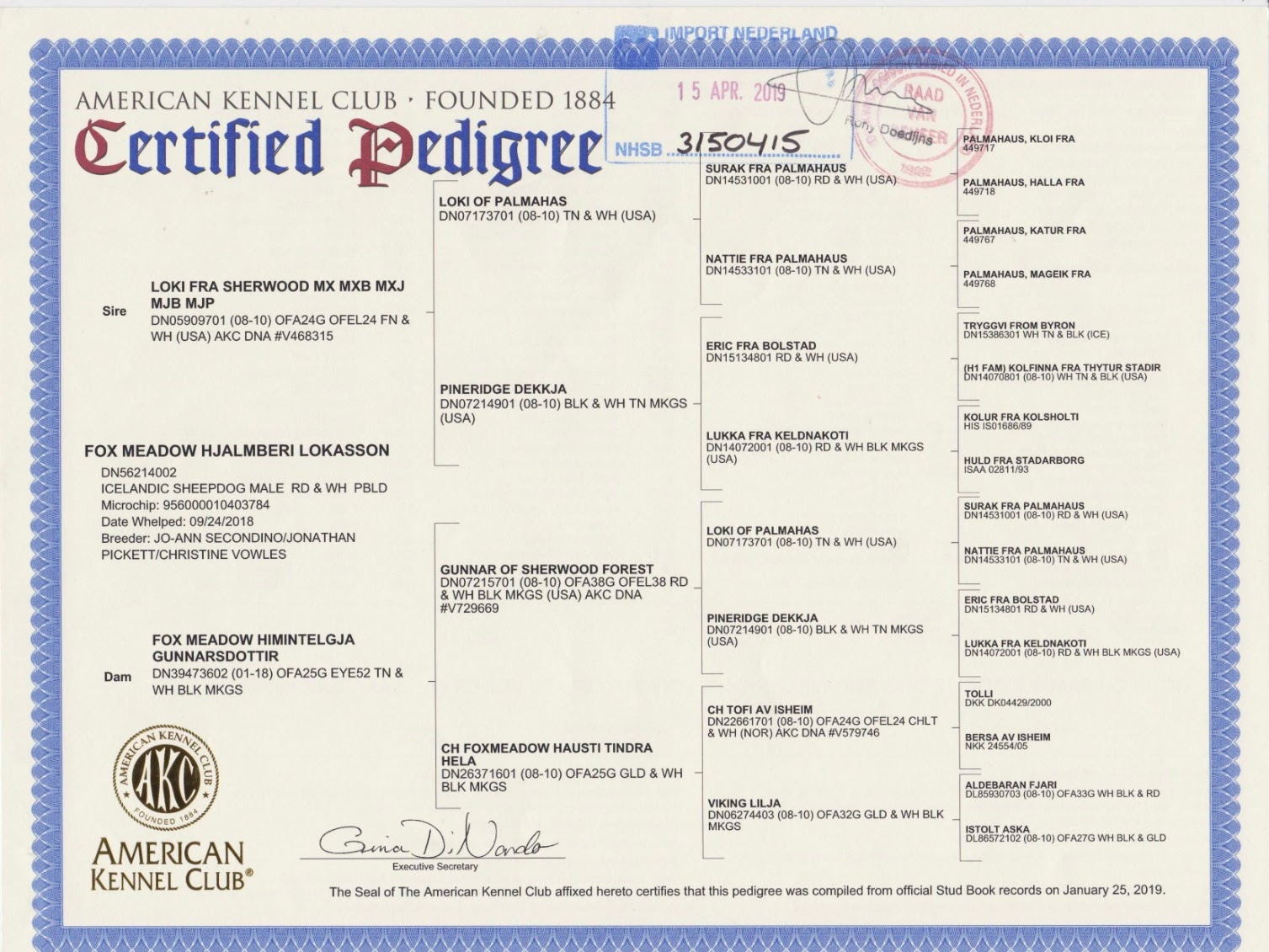 „Loki was imported from the USA, breeder Jo-Ann Secondino, born in a litter of three. His pretty sister Svanmey came also to the Netherlands.
Loki is a very sweet social dog, easy with other dogs and very good with humans and also with kids. Until now he is not really a barker. He is really a big swimmer, he loves to play and swim around with other dog friends, also with his Canadian girlfriend Skaga.
Day of birth: 24-09-2018
Mother: Fox Meadow Himintelgja Gunnarsdottir
Father: Loki fra Sherwood Forrest
MK 2019: 16,5 (the darkgreen group)
HD A – Patella luxation free – Ecvo free – teeth complete – double claws
Loki’s belongs to the dark green breeding group and his lines are rare and are not in Europe.
He is genetically very important to our breed to keep the breed healthy. So we are looking forward to seeing the results in the future.“ 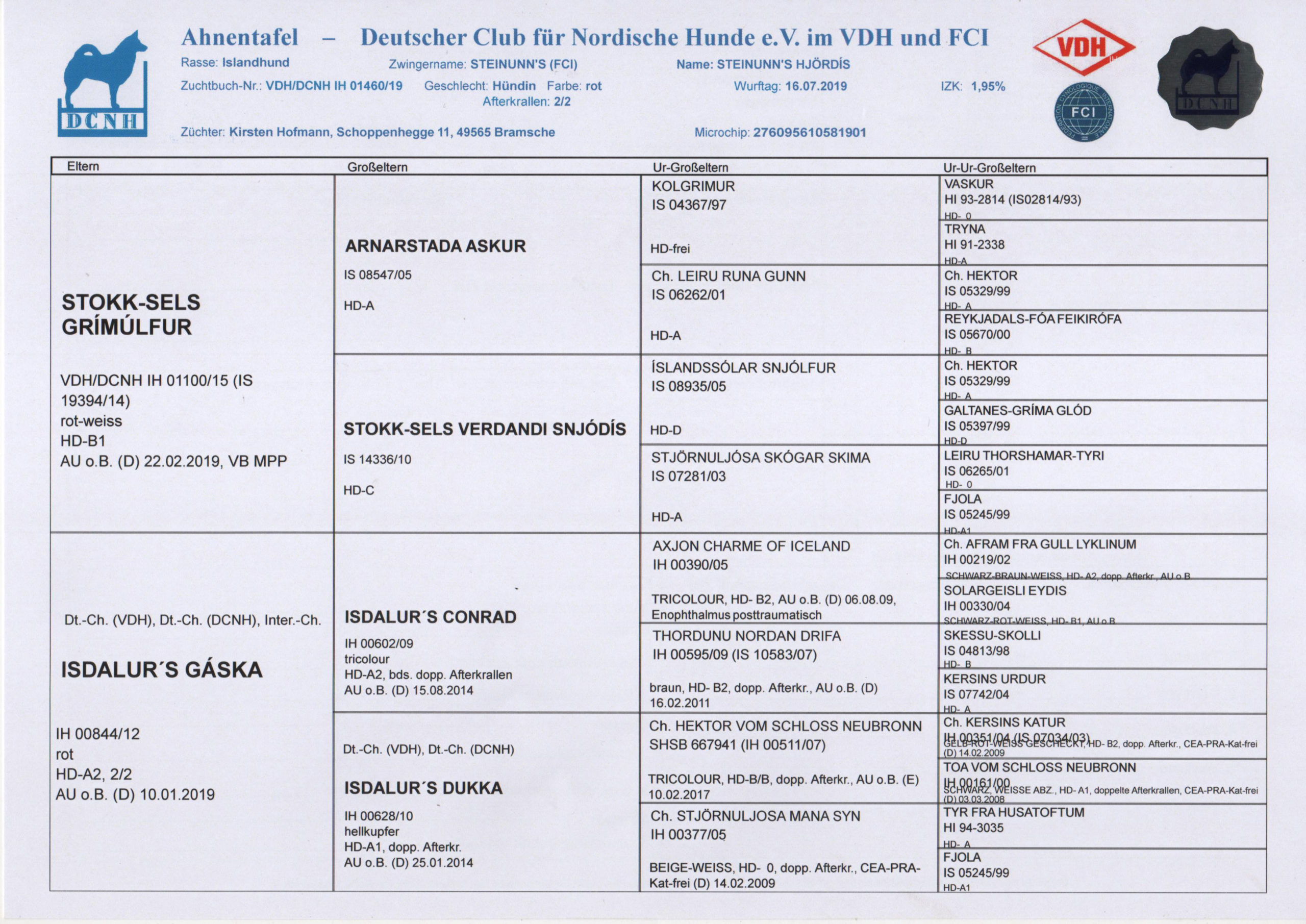 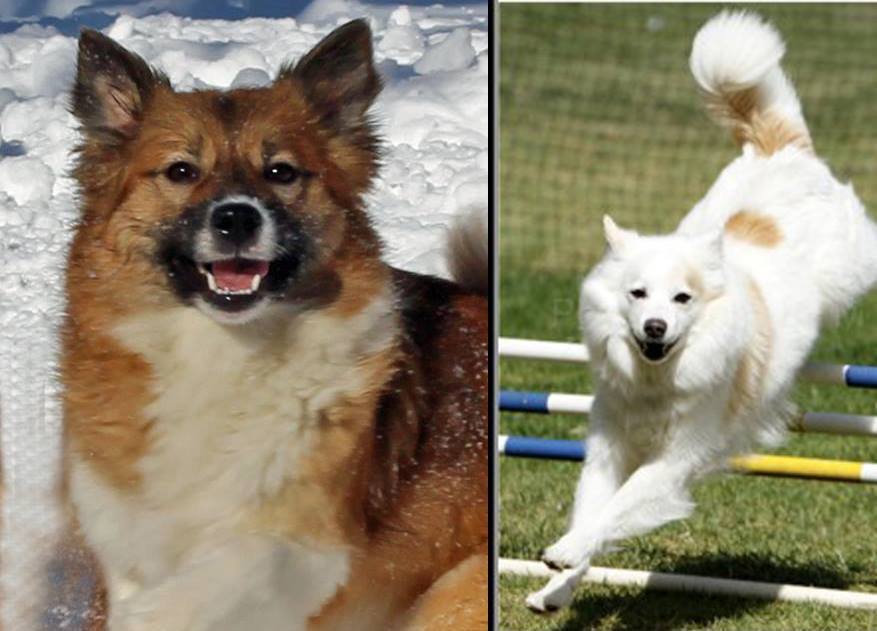 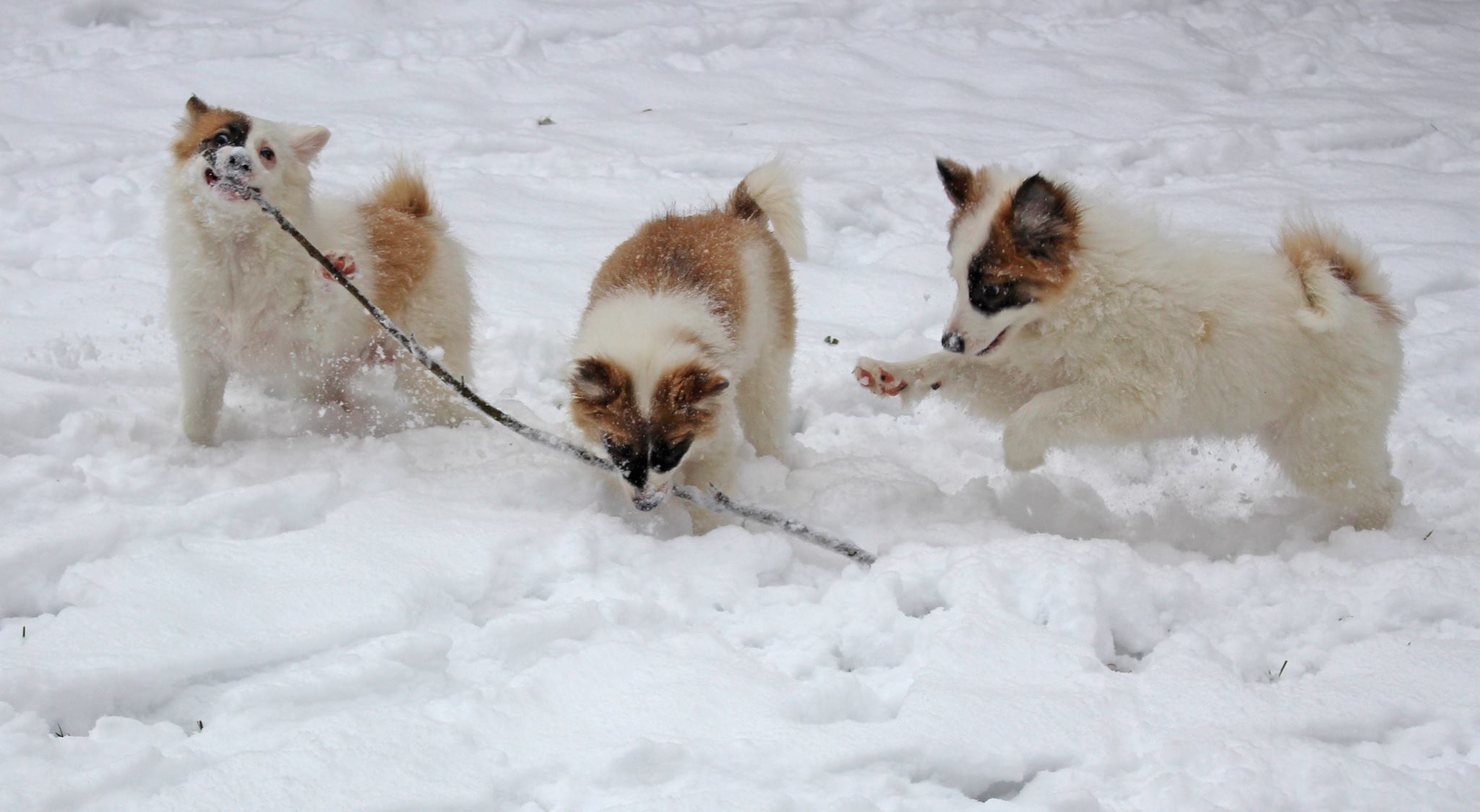 A Grandfather of Fox Meadow Hjalmberi Lokasson „Gunnar of Sherwood Forest“:
„Gunnar of Sherwood Forest aka „Edgar“ is a wonderful dog, at almost 13 years old is still fertile, has
fabulous type and temperament.  Gunnar comes from the Palmahaus line, an old North American line that
is unique to the United States as their ancestors left Iceland prior to the creation of their studbook.  These dogs
are considered genetically valuable according to reports in our breed’s population analysis. „

The Father of Fox Meadow Hjalmberi Lokasson „Loki fra Sherwood Forest“
20. November 2018
„It is with great sadness that I share that Loki fra Sherwood Forest MXJ. AX. NA. NAJ. OAJ. AXJ passed away last evening at the age of 15.
Loki was Sandi Dunn’s faithful companion and partner in competition. Loki for Sandi was that one dog who ….. opened doors ….. made new things possible ….. he was her heart dog. The pair were among the first two Icelandic Sheepdogs to qualify for the AKC Agility Invitational when the breed first became eligible to compete in AKC performance events in 2006. Their participation in AKC performance sports allowed the ISAA to document member involvement in AKC events so that we could move out of FSS and into Miscellaneous Class and finally to become a fully accepted breed. They helped introduce K-9 performance sport enthusiasts to a new breed that they could compete with. Loki was a wonderful ambassador for the breed.
Loki was not only a great sports dog but was also a direct descendant of the Palmahaus line who was among the first Icelandic Sheepdogs in the USA. The Palmahaus pedigree is among the most genetically unique dogs in our breed, making Loki and his siblings important dogs to maintain our breed’s genetic diversity. Sandi has fostered this pedigree for over a decade to ensure that it didn’t fade away, for this, I am eternally thankful.
Loki is the sire and grandsire to an AKC Grand Champion, to Performance dogs and fabulous companions. Loki’s offspring were among those counted and recorded so that we might move onto AKC Full Acceptance in 2010. His legacy lives on in Blackstar Icelandics, Audurs Icelandics, Alderwood Icelandics, Elskan Min Icelandics, Orlean’s Icelandics, Fox Meadow Icelandics, Tunturiketun Icelandics, Blue Zafir Icelandics as well as having other grand offspring in Germany and across Europe who will be standing stud and having litters.
Jon and I are grateful to Sandi and Loki for allowing us to become part of her Blackstar Family by letting Loki sire our „Valhalla litter“ with our Heaven. They gave us three lovely tempered happy pups who we hope will go on to help keep the breed genetically diverse. I am certain that when Loki crossed the Rainbow Bridge (Bifrost) – he took the path to Valhalla where the Einherjar open the great hall doors and he lays at their feet happily chewing bones among the best of company. Loki Fra Sherwood Forest an incredible Dog who made a difference in our breed and will not be forgotten.